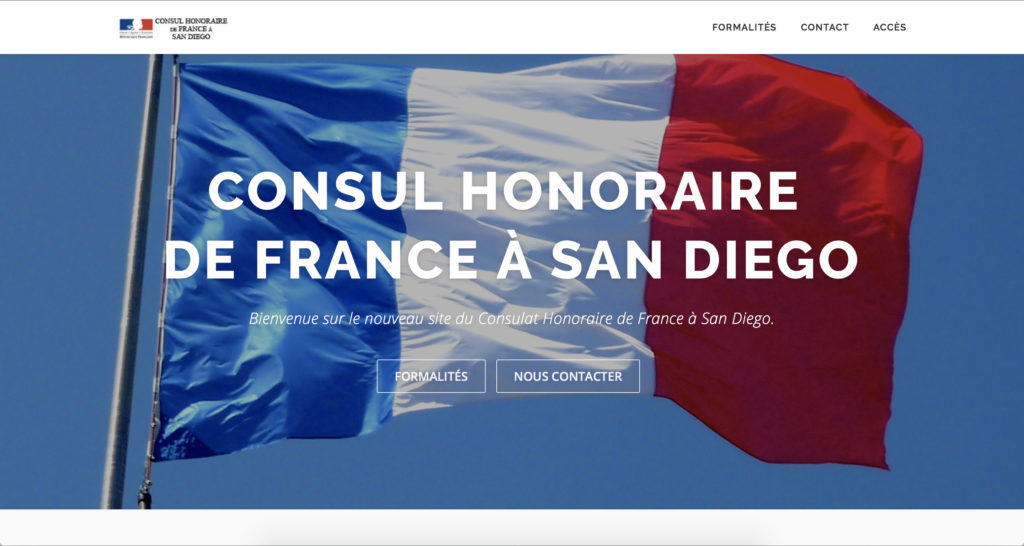 In January 2018, the French Consulate in San Diego relocated his offices inside the Ouistart Business Center. This was after many years at their previous location in Pacific Beach. Honorary Consul Andre Bordes then met with The X Concept’s CEO, Charles Oreve who also has his office at Ouistart.

After discussing the consulate’s website and looking at the information on it, Charles took the helm of the project and built a very simple one page website to modernize the look. Now the website matches the new modern settings of the consulate’s office.

“The former website was made many years ago and was not displaying on mobile, and was not featuring images. It definitely needed a change to help provide information to French citizens residing in San Diego. The website had to be done in French, as it targets French nationals.”

“I developed a WordPress base website to maximize effectiveness. Having some features to help maximize the reach provided by using search engine optimization and social media marketing. This website targets the French community in San Diego. We also are building a Facebook Page for the Honorary Consulate. This page will make it easier deliver content to the community.”

Then, having a contact form to significantly ease the communication between the consul and visitors. A Google Maps plan to help people finding the new location.

The French Consulate now has an online presence that is easy to update. This website will also provide information using multi channel communications to French people throughout Southern California.

Finally, we invite you to visit the French Consulate, located at 8525 Gibbs Drive, Suite 304, San Diego, CA. The honorary consul will be there on Tuesdays at 3:30PM and Fridays at 8:30AM.

previousBig Data only for Big Structures?